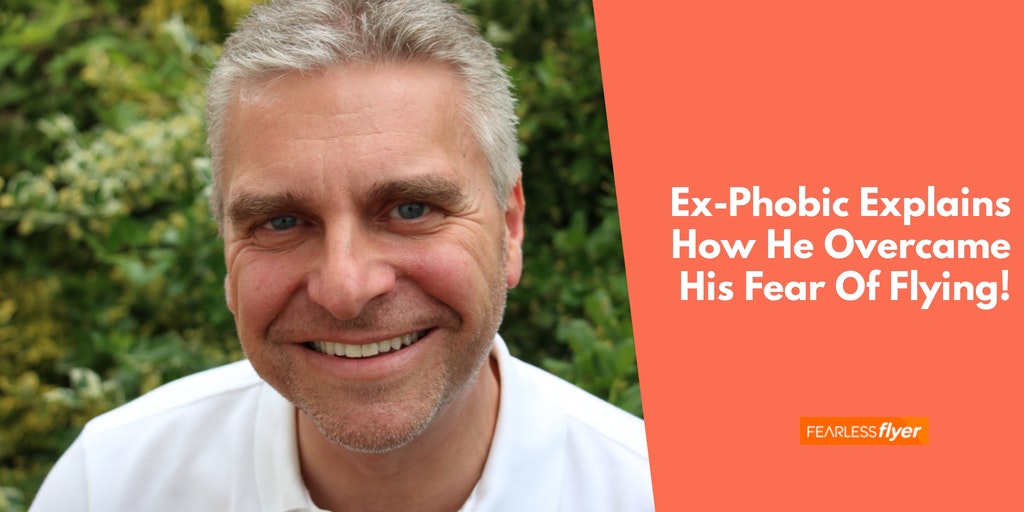 Hello, I’m Mark Wein, I’m the Course Director and one of the founders of the easyJet Fearless Flyer course but ironically, many years ago, I used to have a fear of flying!

So as an ex-phobic, I understand more than anyone how debilitating a fear of flying can be and if you’re reading this and you have any form of anxiety relating to flying, then I absolutely know how you feel!

That’s why I’m so passionate about our fear of flying course. Because I used to be where you are. I used to have the sleepless nights, the bad dreams, the sweaty palms, the pre-flight anxiety, the utter dread and the panic attacks. I’ve had it all! I’ve been there! But it wasn’t always like that….

I was lucky enough to fly from a very young age and I used to find the whole experience both exciting and exhilarating! Back then, I’d really look forward to a holiday and even more so if it involved a flight. But then as I got into my late teens and early twenties this fear just started to build in me.

It wasn’t overnight. I can’t pinpoint one specific moment that triggered it.  In fact at the time I didn’t realise it was even happening because, when I look back now, I appreciate it was actually a very slow decline in confidence which would manifest into anxiety specifically during turbulence.

Back then I didn’t fly that often as air travel wasn’t that cheap or flexible and I had a job that only gave me 4 weeks holiday a year. So I flew infrequently, but with every flight came a growing sense of fear. Initially it started on the day of the flight, then it crept into the days leading up to the flight but eventually it would totally consume me from the moment a flight was booked, even if that was months earlier.

So the build up to a holiday became horrendous. As much as I wanted to go away, the thought of the process of getting there weighed heavily on my mind and the thought of turbulence during the journey would scare me senseless.

Then I started to worry about the weather on the day! Would it be raining? Would it be windy? What if it was snowing? At random moments during the day I would find myself thinking about my flight and stressing about it. It got so bad that in the end I would catastrophise the journey. I had awful visions. It became a major issue for me and I suppose turbulence was ultimately my downfall.

With the benefit of hindsight, I now realise that whilst turbulence was perhaps my biggest fear, my fear of flying was more general than that. Turbulence was just the trigger. The trigger to reminding me that I was in an aircraft that I didn’t trust being flown by people I didn’t know in an environment I didn’t understand!

In the end I hated every aspect of the flight except when we were in the cruise. In other words, when we’d reached altitude and the flight was nice and smooth, I’d eventually sit back and relax as best I could. I certainly couldn’t sleep as I was too busy flying the plane from the back seat!

What I mean by that is that I was tuned into EVERY noise and EVERY sensation. But if the plane was smooth, then in my mind everything was OK!

BUT, any form of movement and that was it! Suddenly I was alert and on the edge of my seat. My heart would instantly start pounding and I was totally focused on what I felt was our impending doom, and if the seatbelt signs went on, my stress levels went through the roof.

I couldn’t even talk to the person next to me. I was a nervous wreck. When we would eventually land, I used to get off the plane utterly exhausted from fear. It would sometimes take me days to get over the anxiety of a flight.

Then, one day, after a turbulent flight back to the UK and having experienced all of that stress, I got off the plane and I swore I would never fly again. I just couldn’t handle it. Enough was enough and I had reached my limit.

I was only 30, I had my own successful business, I was married and I had 2 young children. Yet, there I was, crippled by my fear of flying such that I refused to fly. You can imagine the strain that placed on both my working and my personal life. My refusal to get on a plane was now impacting other very important areas of my life.

So I kept it quiet which meant I had to make excuses as to why I couldn’t fly. Back then I even missed a  business trip to France and had to pretend I was ill because of my fear. I was so embarrassed by the whole situation and I knew I was holding myself back from living my life to the fullest extent and it was affecting the future of my family too!

So here was the dilemma. I didn’t want to fly but yet I knew I was going to have to deal with it. That was the pivotal moment for me. The day I decided to do something about it.

As I say to anyone who I ever speak to who is enquiring about our course, the hardest part of overcoming a fear of flying is that initial moment. The moment you decide to do something about it. That initial call.

So I took mine. In my case it wasn’t an overnight solution because there wasn’t a suitable fear of flying course available to me at that time. So I had to dig around to find my cure. But I did! I set about understanding an aircraft and how it’s constructed.

I learned all about the physics of flight, the pilot training, what causes turbulence and so much more.

I realised I was totally lacking knowledge and whilst it took time to piece it all together, once I had that knowledge it completely changed my perception. Suddenly it all made sense! MY FEAR JUST WENT!

2 years after I stopped flying I was happy to start flying again.

My target was just to be able to fly again. But with each flight came more confidence to the point where I even had some flying lessons and of course, now I fly all over the world in TOTAL confidence.

Does my old fear of turbulence bother me now? Not even slightly! I fly through turbulence without a care. Hard to believe I know, but it’s true. I’ve gone from a total non-flying phobic to someone who flies about 100 times each year without any concern whatsoever.

So after I sold my previous business, I sat down with phobia expert Lawrence Leyton who was also the host of Channel 4s “Fear of Flying” TV programme and we formulated a fear of flying course based on his expertise and my own personal phobic experience and in 2012 we launched the highly acclaimed easyJet Fearless Flyer Course.

The course has been specifically built to help overcome ALL aspects of a fear of flying. So as well as dealing with any technical concerns you may have about an aircraft including a large section about turbulence and why you don’t need to fear it, our fear of flying course also covers a wide range of other phobias including claustrophobia, the fear of heights, the fear of the unknown, the fear of dying, the fear of being out of control as well as panic attacks!

The easyJet Fearless Flyer Online Course has a running time of approximately 2 hours and 30 minutes and can be watched in full or in part as many times as you want over a 30 day period. It includes all of the content you will get on our live ground course which has over a 95% success rate and to date we have cured over 10,000 people.

The online course also includes our highly sought after MP3 player which we will send you to keep, so that you can take it with you on every flight.

It includes a review of all of the aircraft noises, a pilot commentary of a take-off, landing and turbulence sequence, much like you would hear if you were on our live course, and an incredible relaxation session with Lawrence that he does at the start of each experience Flight.

So if you’re looking to achieve what I have, why not take our fear of flying course from the comfort of your own home and change your life forever: